Last year at the SoCal Six-Pack of Peaks Challenge Finishers Party, we wrote down our adventure goals for 2018. One of my big goals for 2018?  Climbing 14,179′ Mount Shasta for the first time. There are many routes to the top of Mt Shasta, but by far the most popular and one of the least technical is via Avalanche Gulch.

Trail Details
Summit: 14,179′
Distance: 12.3 miles
Time: 2 days
Difficulty: Strenuous
Elevation gain: 7,411 ft
Dogs: No
When to go: May – mid-July
Make no mistake. This is not a hike. Climbing Mount Shasta requires winter mountaineering skills, avalanche awareness and sound judgement to know when it’s time to call it a day and live to climb the mountain another time. There is no “trail” to the top. There are no signposts to guide you along the way. You need to know how to navigate ever-changing conditions on snow and ice, on a mountain where the weather can be highly unpredictable. At a minimum, you should have experience traveling up and downhill with crampons and ice axe, self-arrest and glissade skills, and the ability to work together with your team.

Originally there were six of us, but as typically happens, as the date got closer, the team shrank. Ultimately, there were four of us: myself, John, Josh and Amie. We all had some winter mountaineering experience, but none of us had summited Mount Shasta before.

The Avalanche Gulch route begins at the Bunny Flat Trailhead (6,920′). There are pit toilets, wag bags (required beyond Horse Camp), and self-issue summit passes ($25 per person at the time of writing). We met at 7:00 am, put on our mountaineering boots, checked our gear one last time and shouldered our backpacks for the climb.

Our destination for the day was Helen Lake, and our goal was to get there before the sun became too strong.

There is a clear view of our route to Helen Lake from the trailhead, as well as the climb from there up to Red Banks. Mount Shasta looks incredibly steep and ominous, but also beautiful and awe-inspiring from this south-facing trailhead.

Left-to-right: Jeff, Josh, Amie and John, one mile in.

We were following the “summer trail” to Horse Camp (7,800′), so-called because it’s used when the snow has melted. Earlier in the season, climbers can follow a more direct route up the snow toward Helen Lake.

The first 1.8 miles is forested and mostly shady in the morning, but we stopped for a break at the historic Horse Camp just the same. This stone lodge is in remarkable condition and kept by crew of caretakers who rotate every five days. It’s also the last reliable source of water without melting snow. Mike, the caretaker on duty called it “The Fountain of Youth” and claimed he was 140 years old. Whether the water really possessed miraculous age-defying powers or not, it sure tasted good. 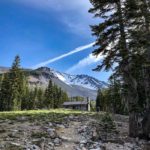 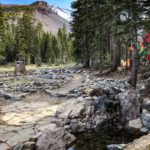 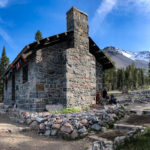 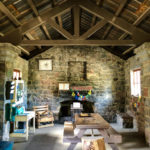 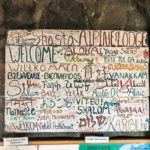 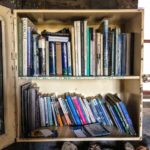 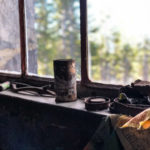 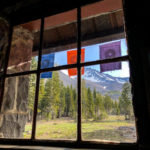 After topping off our water and checking out the lodge, we picked up the summit trail. The route is called Olberman’s Causeway, and portions of it are built of huge stones that pave the trail up into the mountain.

The trees grow sparse and soon you are climbing in a lunar landscape of volcanic scree. This section of trail is usually snow-covered earlier in the season, which in some ways would be much more pleasant.

The trail climbs steeply from Horse Camp. With the snow melted, we had to pick our way along the rocky switchbacks up the mountain to 50/50 Camp. It pays to turn around once in a while to see how far you’ve come.

We took another break and regrouped at 50/50 Camp (9,280′). This is another popular spot for folks to setup base camp, but we wanted to get further up the mountain. The snow fields began here.

The weather was warm and we were able to hike up in boots and poles — no traction devices required. Along the route there are patches of pink watermelon snow. Be sure not to eat or melt the pink snow; it’s not good for you.

We reached Helen Lake (10,400′) around lunchtime on Friday. It’s called a lake, but it’s a large flat area covered with snow and commonly used as a base camp. There were many tent sites already dug out and leveled in the snow, so we picked a trio of sites near each other and setup our tents.

Our plan was to stay in the shade through the intense afternoon sun, resting and melting snow with our stoves — our only source of water until we returned to Horse Camp. 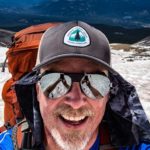 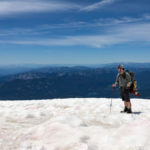 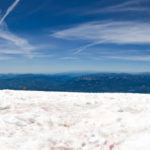 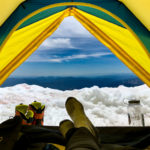 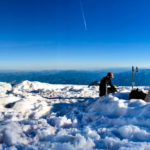 As the sun dipped below the mountains, the temperatures quickly dropped. We were in our tents by 9pm for a 2am alarm. Saturday morning at 3am, we strapped on our crampons, helmets and headlamps and began the ascent of Avalanche Gulch.

The ascent was steep and slow going, carefully climbing and definitely feeling the effects of the thin air. As the sun began to rise, the pyramid-shaped shadow of Mount Shasta swept over the landscape, creating an awesome reminder of how prominent this volcano is.

The route up Avalanche Gulch itself was fairly easy to follow, thanks to the headlamps of the many other climbers already headed up. In general, you head to the right of The Heart and (when there is sufficient snow cover) to the right side of Red Banks, just left of The Thumb.

Pretty much everyone took a break when they reached the top of Red Banks (12,800′), rehydrating and fueling up for the next part of the climb: Misery Hill.

Here we skirted the top of the Kenwakiton Glacier. The bergschrund (the crevasse seen below opening up near the left side of the glacier closest to The Thumb) often opens wider across later in the season, forcing climbers to instead climb up one of the chutes in the Red Bank. We were fortunate to have enough snow coverage to take this easier route.

The climb up Misery Hill felt less dangerous than Avalanche Gulch, although the wind really picked up. We had gusts up to 40 mph that nearly knocked you off your feet.

When we reached the top of Misery Hill, there is a broad saddle between you and the final climb to the summit. We regrouped, checked with some of the climbers coming back down from the summits, and decided it was safe enough to continue.

The final climb to the summit was not bad, with well-worn tread through the snow and rock to the craggy summit of Mount Shasta. We took the obligatory summit selfies, signed the summit register, and headed back down. 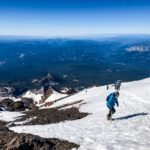 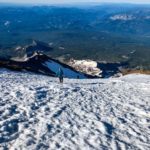 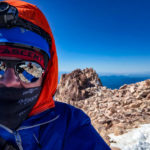 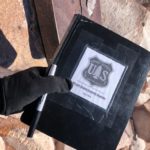 The summit in some ways feels like the “goal” of this adventure, but it’s worth reiterating that this is the halfway point. We had over 7,000 feet to descend. Working our way back to Red Bank was pretty easy (much easier to catch your breath than when you’re climbing). A short distance down from Red Banks, we were able to glissade nearly 2,000 vertical feet down the mountain to Helen Lake.

We spent roughly an hour breaking camp, then began the slog down to Bunny Flat. And a slog it was. At this point, our legs and feet were tired, AND we were carrying our fully-loaded backpacks. What seemed like a short easy hike up to 50/50 Camp turned into an seemingly never-ending downhill grind. It was hot, and we were looking forward to being finished.

Back at the trailhead, I changed into fresh clothes. Josh and Amie bid adieu (they had other plans), and John and I had dinner at Yaks on the 5 in Dunsmuir — supposedly one of the top 100 restaurants in the country. My burger was good, but I could probably name 100 restaurants that are better. But at that moment, it didn’t matter. We had summited Mount Shasta, made it back down the mountain, and our bellies were full. Life is good.

Video Overview of the Climb

One of my climbing partners Josh from California Through My Lens put together a 10-minute video overview of the trip.

The Oregon Coast is rugged, beautiful and often uncrowded. This bluff-top … END_OF_DOCUMENT_TOKEN_TO_BE_REPLACED