Backpacking the Wonderland Trail in Mount Rainier National Park is a great way to test the thru-hiking waters to see if it’s for you. Joan and I visited Mount Rainier National Park for the first time in 2018, as we were scouting trails for the Pacific Northwest Six-Pack of Peaks Challenge. We were awestruck by this majestic mountain. The 14,411 foot active stratovolcano is so massive that it creates its own weather systems. I knew I’d be back.

The Wonderland Trail is a 93-mile trail that loops completely around Mount Rainier. You might assume that it’s easier because it’s going around a mountain rather than over mountain crests. You would be wrong. The Wonderland Trail climbs and falls 23,000 feet over those 93 miles. You are constantly either going up or going down.

Wonderland Trail Overview
Distance: 93 miles
Time: 3-14 days
Difficulty: Strenuous
Elevation gain/loss: 25,593 ft
Dogs: No
When to go: July-September
Once a year, my friend Jason and I sign up for a half marathon near a different National Park. We’ve run at Zion, Grand Canyon, Glacier and Grand Teton. In 2019, we were hoping to sign up for the Rocky Mountain race, but alas, it’s held once every two years, and 2019 was a “bye” year. So we hatched an alternate plan: thru-hike the Wonderland Trail. Shortly after we announced our intentions our friend Derek signed on and we had a team.

Jason had previously attempted a thru-hike that was aborted due to his hiking partner’s illness, so this was a sort of “redemption hike” for him. He suggested modifying our route from the official trail, taking more scenic Spray Park route between Mowich Lake and Carbon River. This guide covers the Wonderland Trail using the Spray Park alternate.

Campsites are designed to accommodate up to five people and two tents, with some camps also having group sites that could accommodate up to 12 people. Your permit requires a detailed, day-by-day itinerary that states which campsite you will stay at on each specific date of your trip. 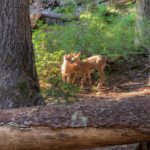 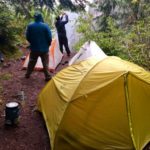 Sites are designed for up to 5 people, and 2 tents

When we did our original planning, we were using an 11-day itinerary using this excellent online itinerary planner. It provides some really useful tools, including the distance between camps, sunrise/sunset times and hours of daylight.

Scoring permits for the Wonderland Trail turned out to be our first challenge. You can submit your permit request beginning on March 15th. Permit requests are only accepted online, but there is no rush to submit. Submit your request anytime between March 15th and March 31st. Rangers begin processing the requests on April 1st in random order. Each permit request includes a non-refundable $20 fee that is paid whether you are awarded a permit or not. You increase your odds by having flexibility in start dates and avoiding peak times (weekend and holidays).

In our case, the three of us each applied for a permit, with different start dates and slightly different itineraries. Our hope was that at least one of us would get a permit. Sadly, none of us got a permit.

Fortunately, 30% of the campsites are reserved for walk-in permits. We had allotted two weeks for the trip to give ourselves flexibility, and decided to take our chances. Jason and I drove to Longmire on Sunday and found an open car campsite at Cougar Rock Campground. Once we reserved that, we drove down to Longmire, walked into the Wilderness Information Center at 2pm and walked out 30 minutes later with a permit to start the trail the next day.

Instead of doing the trail in 11 days as originally planned, we opted to maximize our available time off and take 13 days to hike the trail. Because of the lengthy duration of our trip (most trips on the Wonderland Trail are closer to 6-9 days), we were able to score some of the most-coveted campsites along the way. Your permit lists your day-by-day itinerary, and must be attached to the outside of your pack when hiking, and your tent when camped. And in case you’re wondering, rangers checked our permits two times along the trail. 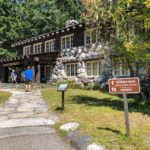 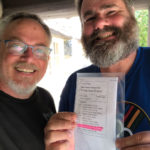 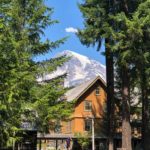 Breakfast at the Lodge

For walk-in permits, the ranger handed us a blank itinerary and a print-out showing current availability for each campsite by date. We were warned to be quick about filling it out, as there are three ranger stations on the trail where hikers can request walk-in permits. All are working from the same availability data, so while a site might be available when the ranger hands you the list, by the time you turn in your itinerary, someone at a different ranger station may have already taken that last campsite. In our case, we were pretty lucky. First, we were starting on a Monday (rather than a weekend date). Second, we had 12 nights of camping along the way. While the first two days would require a lot of miles, we would have plenty of short, easy mileage days on the second half of our trip. 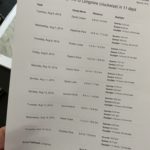 One of our proposed itineraries 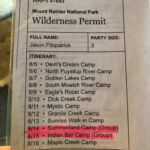 Our walk-in permit with our final itinerary

There are three main locations to ship or cache resupply packages: Longmire, Mowich Lake and Sunrise. Our hope was that we would start in Longmire, so we shipped resupply packages for both Mowich Lake and Sunrise. Another option would be to drive to the location(s) where you want to put a cache, which is feasible if you have day before you begin your thru-hike. Following the directions on the NPS website, we shipped in 5-gallon plastic bins, taped shut, via Fedex. It was expensive (~$158 for four buckets) so that might factor into your decision on the number of resupply packages, or whether you want to hand-deliver them the day before your trip begins.

One important tip: The NPS website tells you to write the date that the cache will be picked up on the container, but it doesn’t explain why. They have bear-proof storage boxes that are not large enough to store all of the caches. The rangers will fill the storage boxes with the caches based on the pickup date, and store the remainder in a secure area that you cannot get to. Since we were shooting to get walk-in permits, we didn’t know exactly what dates we would pick-up each cache, so we put down a date range.

As it turned out, all three of us got our resupply shipments at Mowich Lake, but Derek’s package was not in the storage at Sunrise. Fortunately he was able to track down a ranger who was able to open up the building where the other caches were stored, and his resupply package was found. The date of pickup is important, or else be sure to get there before the ranger station closes.

If you ship your resupply packages, bear in mind that you cannot ship fuel. We planned for this and carried a bit extra from the start. We were able to purchase additional canisters as well as snacks at the small store at Sunrise.

The remainder of this guide outlines our counter-clockwise journey on the Wonderland Trail, beginning near Longmire and taking the Spray Park alternate route. I’ve divided it roughly into three segments: Longmire to Mowich Lake; Mowich to Sunrise; and Sunrise back to Longmire.

You can travel with us with a day-by-day guide based on the itinerary we used to hike the Wonderland Trail, with photos, trail description map and elevation profile. 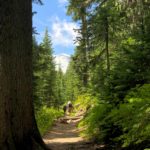 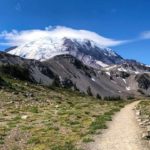 Another look back at Rainier 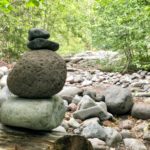 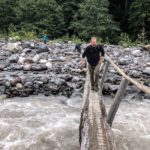 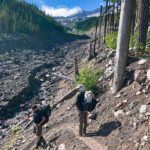 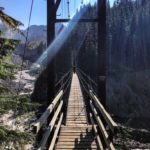 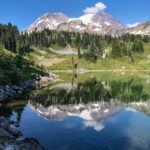 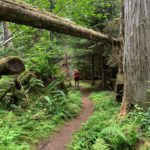 Would I have done anything differently were I to hike the trail again?

Originally hiked between August 5-17, 2019 with Jason Fitzpatrick and Derek Loranger.

Day-By-Day on the Wonderland Trail