Every Southern Californian can point out the white topped Mt. Baldy — actually it’s real name is Mt. San Antonio. Baldy is a SoCal icon that stands out boldly as a snow-covered backdrop for much of the year. At 10,064 feet above sea level, the snow often sticks around well into June. The higher altitude and easy access makes it a popular training hike for Whitney (or in my case, the John Muir Trail). And in fact, I included Baldy as peak #3 in my Six-Pack of Peaks progressive training series. This hike is the third in my Six-Pack of Peaks series of training hikes that I originally used to train for the hiking the John Muir Trail.

I hiked Mt. San Antonio as a loop route with some friends. We started at the Manker Flats trailhead (National Parks Adventure Pass required), taking the winding fire road up Baldy Notch, then hiking the Devil’s Backbone to the summit. Our return route took us down the steep Baldy Bowl trail, passing the Sierra Club Ski Hut and San Antonio Falls on the way back to Manker Flats.

It should be noted that the previous weekend we hiked up Cucamonga Peak and it was almost too hot. A week later I found myself atop Baldy where it was 35 degrees with fierce winds. Thankfully, I was well-prepared with plenty of layers. Even so, we didn’t linger as long at the summit as we might have wanted.

The trail begins up a paved road which quickly turns to gravel as it passes the San Antonio Falls overlook. This windy fire road eventually crosses the Mt. Baldy ski area, and meets up at Baldy Notch. The ski lift to the notch operates throughout the summer. It’s about $10 for a one-way ticket up (or $8 one way down) and some people use this as a short cut for what’s probably the least exciting portion of the hike. On the plus side, this route provided a nice easy grade to climb and made warming up much nicer.

Once you reach the Baldy Notch, you can hike straight up the ski run to the east, or follow the trail that runs slightly south east. The ski run is a little steeper and more direct, and that’s the route we opted for. You are quickly rewarded with great views in every direction.

When you finally reach the boundary of the ski area, the infamous Devil’s Backbone trail begins. This trail sounds worse than it is. It runs along the top of a narrow ridge, but when it’s clear of snow and ice, it’s a pretty safe trail.

Those with a fear of heights might feel a touch of vertigo, but it doesn’t require any technical equipment (although trekking poles are nice). Check with the ranger station at Baldy Village to confirm trail conditions. On the darker side, there have been deaths on the trail. With snow and ice, it can be very treacherous.

The trail skirts the side of Mt. Harwood, opening up to a sweeping view of Baldy Bowl. This bowl is pure scree and essentially unclimbable except when covered with snow, and then only with an ice ax and crampons. It’s great training for even higher mountaineering, and something I hope to do next winter. This time of year, the snow is gone from the bowl, and the trail clear of all but a few patches of snow.

The last climb is a series of steep switchbacks up the side of Mt. San Antonio. It’s a busy trail, with all sorts of people going up and down. Pick your route and take your time. If you’re used to living at sea level like me, the high altitude begins to slow you down just a bit.

Looking back down the final ascent you’ve got a great view of Mt Harwood.

The summit of Mt. San Antonio is a broad knoll with a large iron plaque marking the spot. You’ll see several ad hoc stone shelters erected to provide some protection from the wind, which on this particular hike was fierce. Though it was comfortable down at sea level, it was 35 degrees at the summit, and much colder when you factor in the wind chill.

To return to Manker Flats we took the Baldy Bowl trail, which actually skirts the bowl on a ridgeline before steeply descending in a series of switchbacks to the base of the bowl and the Sierra Club ski hut. The log benches at the ski hut provide a great place to take a break and the sound of babbling San Antonio creek is refreshing.

As we descended toward San Antonio Falls, the wildflowers became more plentiful. If you have time, you can stop for a closer look at the falls. This year’s heavy snowfall has made them spectacular.

PRO TIP: I track all my hikes using GaiaGPS. It’s the best solution for staying on the right trail, it works even when you don’t have cell service, and there are versions for iOS and Android. The app is free, and you can get a discounted membership for maps here. 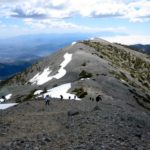 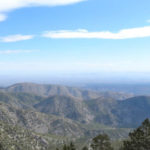 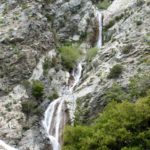 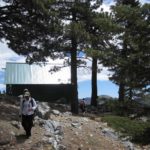 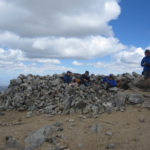 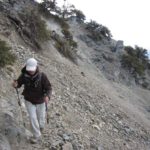 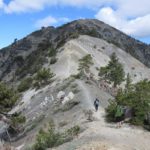 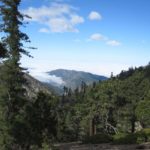 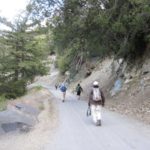 Bag the Six-Pack of Peaks

What is the SoCalHiker Six-Pack of Peaks?

Note that this is a wilderness hike. Come prepared with the ten essentials, including a map that you’ve studied beforehand and the knowledge of how to navigate and find an alternate route in case of wildfire or other emergency.

There is no clear signage to the Ski Hut Trail from the summit, and it’s easy to find yourself headed down the wrong route. I recommend carrying the Harrison Mt. Baldy and Cucamonga Wilderness Map, and backing that up with the GPX track loaded in GaiaGPS on my full-charged phone. If in doubt, you can (and should) hike this as an out-and-back, returning via the same route you took up to the summit.

Special thanks to Bob from Pasadena, Tyler, Kelly, Ivana, Tari and of course Joan for joining me on this hike!