South Sister is the third tallest mountain in Oregon. At 10,363′ it’s the highest of the Three Sisters, and also the youngest, geologically-speaking. The cauldron holds the highest lake in Oregon–when it’s not frozen and buried in snow. It’s home to eight glaciers, including Prouty Glacier, the largest in Oregon. And it’s a great non-technical ascent that caps the Central Oregon Six-Pack of Peaks Challenge.

Trail Details
Summit: 10,363′
Distance: 12 miles
Time: 6-9 hours
Difficulty: Strenuous
Elevation gain: 4,820 ft
Dogs: Yes, on leash
When to go: Late July to early October
Download GPX
This hike is a strenuous, all-day affair. The top section includes a scramble up a rough-shod slope of scree. Large sections of snow are not uncommon even in late July, so trekking poles and traction may be advisable.

The South Sister Climber’s Trail begins at Devil’s Lake. A $5 Northwest Forest Pass is required, but if you have a National Parks annual pass and a hang tag, that will suffice. The parking lot fills up early, and overflow parking is available along the roadside. The trailhead is about 30 miles west of Bend on Cascade Lakes Highway. You’ll pass the Mount Bachelor Ski Resort, then Sparks Lake, finally turning left into the Devil’s Lake Campground turnoff.

You can get driving directions to the South Sister Climber’s Trailhead via Google Maps here.

Hiking to the Summit of South Sister 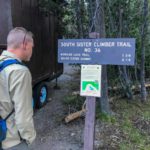 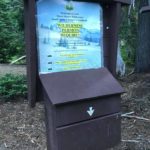 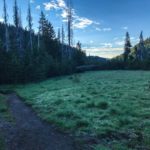 Follow the trail, exercising caution when crossing back over Cascade Lakes Highway. When you reach the information board, you’ll need to stop to fill out a free, self-issue wilderness permit. The original goes in the box; keep the copy with you on your hike.

The trail begins gently, but steepens as it switchbacks up the canyon to the plateau. 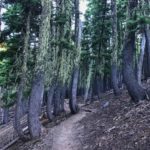 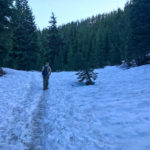 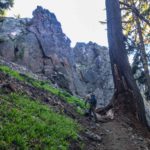 Just over two miles up the trail, you reach a junction with the Moraine Lake Trail and the beginning of a long, rolling section of easy hiking across a plateau. This is where Dan and I looked ahead at South Sister looming in the the distance and thought “we’re going up there?” Indeed, we were.

The Climber’s Trail skirts the edge of the plateau, providing a great view of Moraine Lake from above. There are campsites down there, and it would make an excellent place to camp on an overnight trip up South Sister.

At about 3.5 miles, the plateau gives way to the mountain once again, and climbing begins in earnest. In mid-July, we hit numerous patches of snow, but being a popular route, all had good tread. We were able to traverse them safely without traction or gear other than our trekking poles.

At 5.7 miles, the trail reaches the western edge of the largest glacier in Oregon, the Prouty Glacier. Over 1 square kilometer in area, it was an impressive sight.

At this point, there is less than a mile to the crater rim, yet the going is slow. The “trail” spiders into a series of multiple routes, scurrying up steep volcanic scree that takes half a step back for each step forward. The trail is fully exposed. We were thankful to be hiking in the cool air of the early morning, but we could tell that it was heating up. The sun was intense.

Finally at about six miles, we reached the crater rim. The summit itself is on the far north side of the crater, but it’s an easy hike with a short section of boulder scrambling.

Some chose to forge straight across the snow-filled cauldron, but the snow conditions were questionable and we made better time on solid ground.

Numerous groups of hikers were resting near the summit. The high point is atop a cluster of boulders. 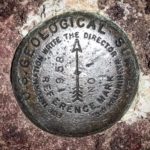 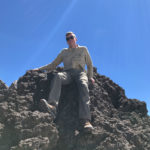 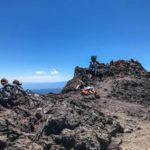 The views on this crystal-clear day were incredible, with a stunning vista of Middle and North Sister and well beyond.

Heading back along the crater rim, the views of Broken Top and Mount Bachelor were amazing, too.

Making our way back was much easier. At times, multiple footpaths through snowfields required us to check our bearings to choose the most efficient and direct route to the actual trail, but it was pretty straightforward. 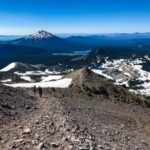 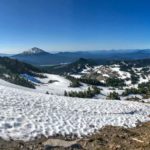 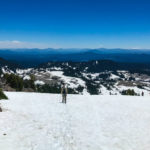 Here’s the forecast for the summit of South Sister.

South Sister is part of the Central Oregon Six-Pack of Peaks Challenge, a self-paced hiking challenge that takes you up six, iconic peaks–each one a bit higher and tougher.

It’s a challenge in itself, or great training for still bigger adventures. Learn more and sign-up here.

The Oregon Coast is rugged, beautiful and often uncrowded. This bluff-top … END_OF_DOCUMENT_TOKEN_TO_BE_REPLACED