Day 21 on the John Muir Trail…

Last night we camped in the shadow of Mt. Whitney. We woke up excited, knowing that we were so close to our goal. We had been hiking on the John Muir Trail for three weeks. We had come a long way from that first day in Yosemite. We met many challenges — both physical and mental. Now there was no question about whether we would finish the JMT — but when.

John Muir Trail Day 21
Distance: 7.23 miles
Cumulative Distance: 206.23 miles
Total Ascent: 2,147 ft
Cumulative Ascent: 56,396 ft
Harrison Map Sheet 1
Joan felt so confident and enthusiastic, she talked about marching right up to the top of Mt. Whitney right now! I suggested we get to Guitar Lake first, and then see how we felt.

Guitar Lake sits at 11,500 feet on the west side of Mt. Whitney. Our hike today to the lake would be a relatively short seven miles, so who knows what we’ll do!

Near the Crabtree Ranger station, we picked up a wag bag. This is a cleverly designed contraption that you poop into. That’s right, we would be required to carry any poop we created from here until the end of the trail.

Fortunately, we only had one more night on the trail.

From Crabtree, the JMT climbs steadily beside babbling Whitney Creek. We passed several smaller lakes, and stopped for lunch in a shady spot near the creek.

At this altitude, the trees were sparse. They clustered around ponds, leaving much of the trail exposed to the hot sun.

At about 3:30 PM, we reached Guitar Lake. We setup camp near the “guitar body” portion of the lake, by a cluster of large boulders that would provide a bit of shade later in the afternoon.

At this point, Joan agreed that hiking straight to the top of Mt. Whitney was not going to happen.

We set up the tent, filtered water, soaked our feet in the lake and rested. We ate an early dinner, and decided that we’d start hiking up Mt. Whitney at night. We cleaned up and packed up everything so we could easily break camp in the darkness. We set our alarms for 11:30 PM, then laid down to nap for a few hours before our final ascent.

A Plan is Hatched

The first time I hiked the John Muir Trail back in 1980, we started up Mt. Whitney at midnight. There was a full moon, and we wanted to get up in time to see the sunrise. Having done it once, I suggested we could give it a try this time. We wouldn’t have the sun beating down on us. We had headlamps. So we decided to give it a shot. 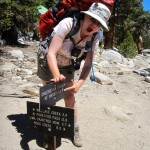 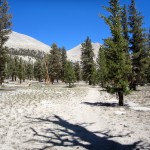