Day 14 on the John Muir Trail…

This morning we warmed ourselves by a campfire as our new friend Brian defrosted his pants, still wet from his creek crossing yesterday. Today we would hike over Muir Pass (11,955′) — our highest pass to date and home to the iconic stone Muir Hut.

Our distance was manageable, but we were going to be hiking at ever higher elevations from here on out. As a point of reference, Muir Pass is higher than San Gorgonio — which at 11,503′ is the tallest peak in Southern California. Starting in Yosemite Valley two weeks ago, we had plenty of time to acclimate to the altitude, but this was our highest yet, and we didn’t know exactly how it would affect our bodies. We would soon find out.

The  first section of the trail followed the forested floor of Evolution Valley, gradually climbing.

We stopped at Evolution Lake to filter water, munch on some food and enjoy a little patch of green grass under the blue skies.

After leaving Evolution Lake, I wasn’t feeling well. My head ached, and my stomach was uneasy. I didn’t know if I could go on, and at one point I decided I was going to sit down and live in that spot for the rest of my life.

Jeffrey suggested I eat something every hour. There are times when you don’t feel hungry or thirsty, but at these altitudes, it’s more important than ever to provide hydration and fuel.

I ate, rested and we continued on, albiet at a slower pace. And as much as I loved the beauty of the mountains, I’m glad they talked me out of living the rest of my life in that spot on the trail.

During our break, Hari and Jeffrey were concerned that Joan might not make it to the end of the John Muir Trail. After rest, food, water and some time to think, we reached a decision. Hari and Jeff would hike on ahead as a team. Joan and I would stick together as a team. We would stick with the original exit date, but they would not wait up for us if we took longer.

We hoisted our backpacks and hiked on, now officially in two teams.

Wanda Lake was beautiful, but the weather was becoming bleak. Dark clouds loomed ominously, and the wind chilled us.

The Final Stretch to Muir Pass

I have to pause here to say a few words about that final mile to Muir Pass. It sucks. It’s a dreary, “trail” up an area covered with granite gravel. There is no dirt — just softball-sized gravel that makes each step a chore. It didn’t help matters that we were tired and it was towards the end of our day, or that we were at the highest altitude yet. But we had spied Muir Hut on the pass, and were determined to reach it.

And reach it we did. We took time to take some photos and duck inside where we had protection from the wind.

Muir Hut is a marvel of construction. It’s built of rocks gathered from the area, but sand and other materials had to be brought in four or more miles. The conical roof structure is amazing, especially from inside. Clark Fork has additional details on the history of Muir Hut.

“This building was constructed in 1930 by the Sierra Club in cooperation with the Sierra National Forest and dedicated to the memory of John Muir.

The Muir Hut is intended as a temporary shelter for hikers caught in storms on this exposed section of the trail. Overnight camping and fires are prohibited.” – From the plaque inside Muir Hut

At this point, the clouds were looking pretty ominous, we decided to hike down the trail and make camp at the first good spot. We didn’t have to go far. We set up near a small unnamed lake just above Helen Lake. We had just barely enough room to clear an area for our tent, but we had an amazing view of the light show as the sun set.

We had two weeks on the John Muir Trail under our belts. It was another rewarding day on the trail. 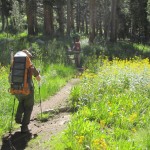 Tomorrow, we hike through the stunning Le Conte Canyon and up Palisade Creek.