On Day 6 of our Wonderland Trail trek, we continued our hike on the more scenic alternate route through Spray Park.

At 9.2 miles, this was going to be one of our longer days. It had rained overnight, and was still misty and damp when we started out in the morning. Leaving Eagle’s Roost, the trail begins with a climb that up switchbacks to the creek that feeds Spray Falls. The wildflowers and meadows grew more spectacular as we hiked through Spray Park, and the clouds parted a few times to give us a peek at the peak of Mount Rainier. 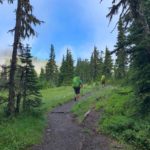 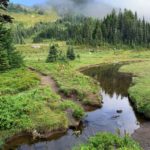 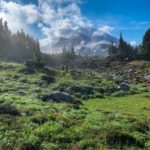 As we climbed above the timberline, the terrain became rocky. A few weeks earlier and we would’ve been trudging over snow fields. Now there were just a few short sections to cross. The trail here is marked with stone cairns and occasionally painted markers on rocks, including the 6,400 foot high point of the Spray Park Trail. 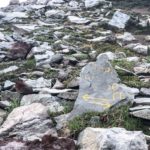 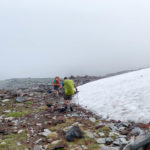 From that high point, we had a long, five-mile downhill stretch dropping over 3,000 feet to the Carbon River and our second suspension bridge on the Wonderland Trail. Once again, the Pacific Northwest weather obscured the views of the Carbon Glacier upstream, but the bridge itself is an impressive span. 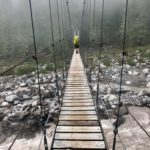 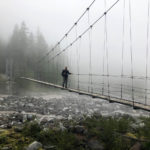 We crossed one at a time, as instructed by the signs at either end of the bridge. We were back on the “official” Wonderland Trail and had a final climb to our camp at Dick Creek: one mile and 1,000 vertical feet.

By the time we arrived at Dick Creek, the fog had turned to a driving mist soaking our waterproof layers. There are only two campsites at Dick Creek, and the larger one was already occupied. We shoe-horned our three tents into the remaining site on the edge of the ledge that supposedly overlooked the Carbon Glacier. I say supposedly because the fog was so thick and soupy, we couldn’t see it.

Crowded camp on the ledge

Heavy mist turned to rain. Derek was having trouble staking his ultralight tent in the saturated ground. Cold and wet, it was a perfect time for Derek to pull out his trail treat: three beers. We toasted to our health, and after dinner enjoyed another new trail tradition, hot apple cider that Jason had brought. Our mood had reflected the weather, and the hot, sweet cider was a perfect pick-up.

Hunkered down in our tents for the night, the rain came, at times driving hard enough to wake me up. We dreamt of drier, sunnier days ahead.

Originally hiked on August 10, 2019 with Derek and Jason.

Day-By-Day on the Wonderland Trail