After starting the trail yesterday with a short 4.5 mile early evening hike, I woke up early to make breakfast–Oatmeal Unleashed washed down with Starbucks Via–and broke camp. We were hoping to potentially meet our friends Craig and Joanne who were hiking the same route but in the opposite direction.

Trail Details
Distance: 14.5 miles
Time: 5-7 hours
Difficulty: Strenuous
Elevation gain (loss): 3,673′ (1,373′)
Dogs: No
When to go: July-September
They had started a day earlier, and had taken our car to the trailhead, while we drove theirs. Swapping this way, we would hike to our own vehicle and could just drive home when we finished. It’s a great way to hike sections of a long trail like the Theodore Solomons Trail without back-tracking.

We started off from our junction and headed up the trail. The grade was fairly easy, but climbed steadily. We soon discovered that this section of the trail had quite a few trees downed in winter, and no trail crews had been through here to clear the trail. I counted roughly 16 downed trees on this stretch of trail. In spite of that, the trail was well marked and easy to follow.

Early on we ran across a group of six college-age backpackers headed to the Clark Range, but once we passed them, we saw no one else the entire day. We were right in Yosemite National Park, and yet it felt like we had the place to ourselves.

The gradual climb grew a bit steeper, and we stopped at mile 7.4 to take a break beside a scenic stretch of Illilouette Creek. We had already climbed over 1,700′.

Our original goal was to reach Upper Merced Lake, then reassess. If we felt good and the weather cooperated, we would press on over Merced Pass, getting as close as we could for tomorrow’s climb over 10,175′ Fernandez Pass.

At 8.1 miles, we had another boots-off creek crossing. The blue skies were turning cloudy, and those clouds were turning ominous.

We pressed on, stopping to don our rain shells and finally reached the junction with an unsigned use trail to Upper Merced Pass Lake. This was a short side trip to a scenic little lake.

We found one poorly chosen campsite that looked like it had been flooded by rain and hail recently. You could see areas where someone had pitched a tent in the past. Today’s storm had turned it into a small creek.

We stopped here for lunch and decided that the weather was looking better. We continued on.

Merced Pass is the epitome of anti-climactic passes. At 9,295′, we had gained over 3,000 feet in elevation and hiked 10.8 miles, but there is no sign or marker, nor even a view to reward the accomplishment. The “pass” felt more like a saddle, but it made no difference.

This pass was a non-event. No views.

Being at the pass meant one thing: we had some downhill ahead of us.

Two miles downhill we reached the junction to Buck Camp, but stayed left toward Fernandez Pass. This section of trail was pretty dry. There were some small pools of water and a few rivulets trickling across the path, but no really good water sources for several miles.

We resolved to stop at the first promising camp area with good water.

At 14.5 miles, we came across a beautiful site along the Middle Fork of the Merced River. There weren’t any established campsites that we could find, but we found spots to setup camp not far from some beautiful cascades with pools filled with trout. A fisherman’s dream, no doubt. Too bad I don’t fish.

We camped near here on the Merced River, with deep, trout-filled pools and roaring cascades. And other than us, absolutely no people.

Day Two By the Numbers

This was a long day for me. We hiked 14.5 miles, and climbed a total of 3,673′ vertically. Much of the trail was shaded, and the weather was perfect for hiking — a bit on the cool side. When we finally found a place to camp, we ate, filtered water, and went to bed early.

Tomorrow we would be climbing over Fernandez Pass. It would be my friend Will’s first time climbing above 10,000 feet. 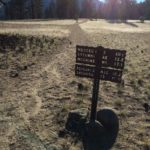 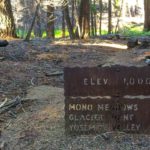 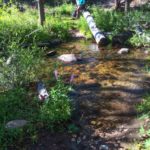 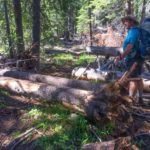 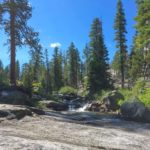 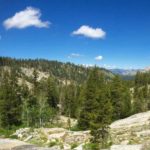 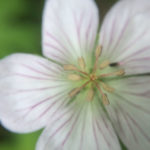 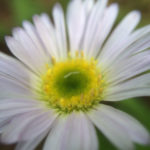 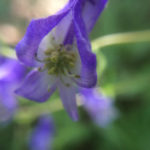 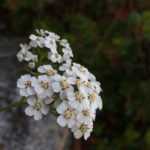 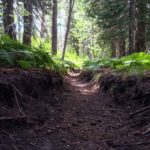 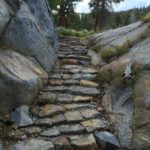 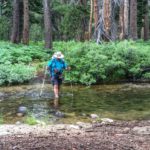 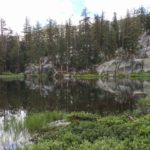 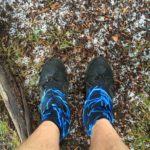 We didn’t get caught in this (we only had a smattering of rain) but there were pockets such as this that had lots of hail. 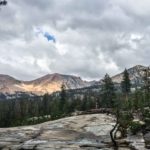 Stormy weather. We got a little bit of rain, but saw areas that had a lot of hail. 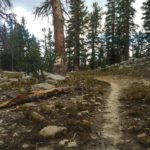 This pass was a non-event. No views. 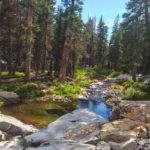 We camped near here on the Merced River, with deep, trout-filled pools and roaring cascades. And other than us, absolutely no people. 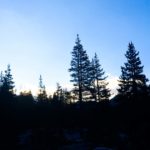 Pretty sure I shot this right before turning in early for the night.

The Oregon Coast is rugged, beautiful and often uncrowded. This bluff-top … END_OF_DOCUMENT_TOKEN_TO_BE_REPLACED