The Deschutes River Trail is a wonderful river-front loop that starts at the edge of the Old Mill district in Bend, and magically transforms into a remarkable wilderness trail before you know it. This is an out-of-bounds trail — meaning that it’s not in Southern California. In fact, it’s in Bend, Oregon — our third destination from our spring break road trip.

Trail Details
Distance: 3.7 miles
Time: 60-80 min.
Difficulty: Easy
Elevation gain: 50 ft
Dogs: Yes
When to go: Year-round
We had heard about the Deschutes River Trail — it’s very popular among the local Bendites — but didn’t really know what to expect. The snow from our first full day in Bend had mostly melted, and we eager to explore.

We had parked near the Deschutes River at the public park and were kind of turned off initially. It started out as a paved path with a lot of moms and strollers. Now I’ve got nothing against moms or strollers, but that wasn’t my idea of a hiking trail. We stuck with it for a little further, and as we passed under the bridge, the pavement ended and the dirt began.

The trail meanders along the pine-forested shore of the Deschutes River, traveling upstream on land that the city was able to negotiate easements for. And while nearby condos peak through the trees on the hills above the river, it really does feel more “wild” than “city.”

The river runs through steep-walled canyon. It was warm enough to get by with just a fleece, but there were still a few patches of snow.

At 0.6 miles we passed under the Reed Market Road bridge, and the trail becomes much more natural.

It’s not uncommon to see geese, ducks and other birds feeding along the banks of the Deschutes River.

Just before the 2 mile mark, you reach a pedestrian bridge that crosses the river. This is the turnaround point; the trail does not continue further upstream.

While the turnaround point might sound almost like an out-and-back route in concept, in reality, it feels more like a loop. The scenery and views are entirely different returning along the opposite bank of the Deschutes. This is also where we encountered the biggest climb on an otherwise gentle, almost flat trail.

At the 2.5 mile mark, the trail follows a short boardwalk around a underground hydroelectric power plant. You’ll see the signs to “stay on the trail” and it’s obvious where the water from the plant rejoins the Deschutes. What’s remarkable is how they were able to build this in such an unobtrusive manner. If I didn’t know there was a hydroelectric power plant there, I might not have even noticed. It blends right in with the natural setting of the river.

At 3.0 miles, the trail becomes a paved path, once again passing under the Reed Market Road bridge and heading through Farewell Bend Park. There are restrooms here, and a rock-climbing playground for children. They start young in Bend.

The Deschutes River Trail was an easy, scenic hike. It’s right in town, so you’ll see locals hitting the trail for a lunch-time trail run. It’s close enough to the Old Mill shopping district that some might opt to hike while others go shopping. And there are several great breweries in the area to whet your whistle afterwards. 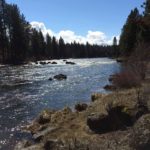 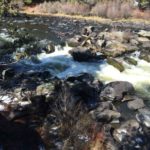 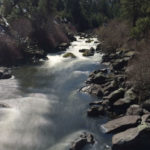 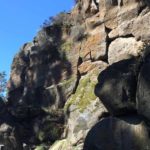 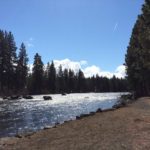 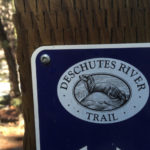 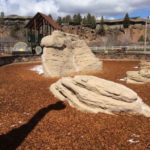 One of the hiking books that I really liked for the Bend area is Bend, Overall by Scott Cook. This book is written in a fun, casual style but has a lot of trails with some great details. Highly recommended.

The Oregon Coast is rugged, beautiful and often uncrowded. This bluff-top … END_OF_DOCUMENT_TOKEN_TO_BE_REPLACED