If you’ve hiked up a peak many times before, taking a new route to the top keeps the adventure fresh. That was my goal as I hiked Mount San Jacinto via the Devil’s Slide Trail from Humber Park in Idyllwild.

I’ve been up Mount San Jacinto more times than I can remember, and I’ve hiked from Humber Park, but I hadn’t combined the two. For my fourth time taking the SoCal Six-Pack of Peaks Challenge, this provided the fresh scenery I was looking for.

Trail Details
Summit: 10,834′
Distance: 15.5 miles
Time: 7-9 hours
Difficulty: Strenuous
Elevation gain: 4,125 ft
Dogs: No
When to go: May-October
This 15.5 mile out-and-back route climbs from Humber Park to the Saddle Junction, where it joins the Pacific Crest Trail for a few miles en route to Wellman’s Divide. From the divide to the summit, the route is the shared by those taking the Palm Springs Tram, but in the end, this hike is longer and has much more total vertical gain. And it has great views of both Suicide Rock and Taquitz Rock – popular rock climbing  destinations.

The hike begins in Idyllwild’s Humber Park. An Adventure Pass is required to park, and a wilderness permit for hiking to the summit can be picked up from the ranger station in Idyllwild. There’s quite a bit of parking here, but it is a popular trailhead for hikers, climbers and backpackers that fills up on the weekends, so get there early.

The trail begins at the southeast corner of the Humber Park parking area. As always, check the information board for any notices and warnings about the trail conditions before heading out.

The Devils Slide Trail climbs about 2,000 vertical feet over 2.5 miles. The trail itself is well-engineered, with a steady climb that is best enjoyed before the sunlight hits it later in the day. As you climb, pause to take in the views of Suicide and Taquitz Rock on opposite sides of the valley. 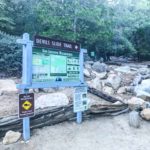 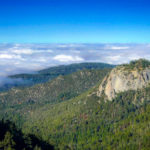 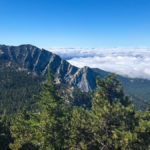 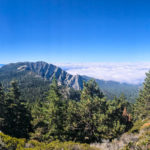 The trail levels off at Saddle Junction, and this is a good place to regroup and take a break. There are several trails that converge at this junction, so look carefully for the PCT trail and signs for Wellmans Divide and Mount San Jacinto before taking off.

Over the next 2+ miles you will be on a section of the famed 2600 mile Pacific Crest Trail. If you hike this in May, there’s a good chance you’ll encounter thru-hikers making their way from the Mexican border to Canada. 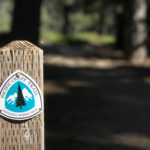 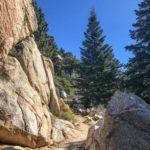 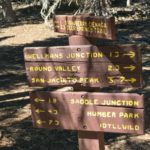 At 5.45 miles you reach Wellman’s Divide, just 2.3 miles from the summit. This is where you meet up with the trail from Long Valley. If you’ve hiked from the tram, this spot is one of the first with a sweeping view.

The trail climbs the eastern slope of Mt San Jacinto, switching back to a saddle where the Marion Mountain Trail joins before heading past the stone shelter and the final boulder scramble to the summit. 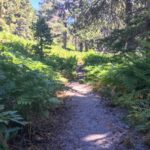 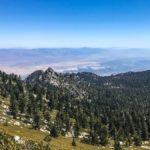 Even on a weekday, it’s not uncommon to run into other hikers, even other Six-Pack of Peaks Challengers. And as John Muir said, “The view from San Jacinto is the most sublime spectacle to be found anywhere on this earth!” 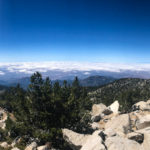 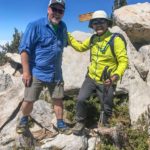 The peak is a great place to rest and refuel. Remember that this is the halfway point of your hike, so be sure you’ve saved enough energy for the hike back down.

Originally solo hiked on September 15, 2017. All photos by Jeff Hester.

The Oregon Coast is rugged, beautiful and often uncrowded. This bluff-top … END_OF_DOCUMENT_TOKEN_TO_BE_REPLACED