Baldy is one of those hikes I like to do once a year or once every five years. Seriously. I feel so beat-up after. It’s supposed to be easier than Gorgonio but I disagree. I have heard of many folks who hike up Baldy several times a month like they were just going to Costco or something. But not me. I did it. But I have no plans of doing it again till the next challenge. It just takes a lot out of me, more than the other peaks did. Sure, it’s beautiful, but it’s brutal. Enough said. 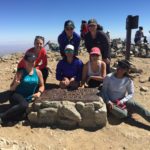 The Oregon Coast is rugged, beautiful and often uncrowded. This bluff-top … END_OF_DOCUMENT_TOKEN_TO_BE_REPLACED